It is currently “early,” which means if you want to “start early,” you need to start now 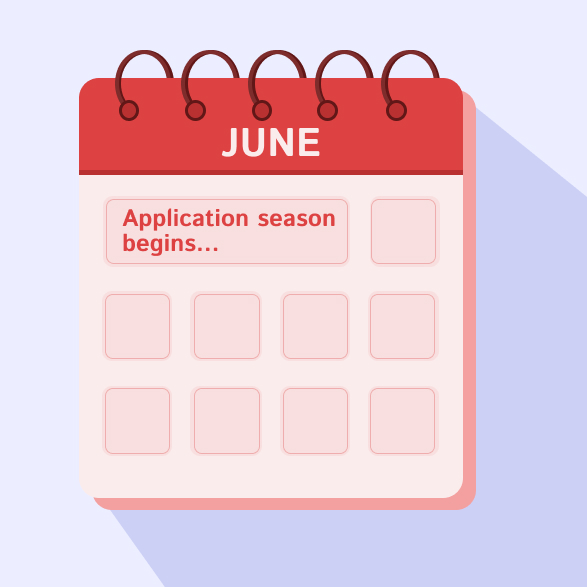 Every year, thousands of college-bound seniors leave their advice for the upcoming junior class. This advice tends to take two forms:

I think I’ve covered one. But it’s part two I’d like to expand upon today.

According to my Google calendar, it is currently “early.” As it’s tracking, “early” runs from the day you finish your junior year until the day you start your senior year. Some people call such a time “summer,” but enlightened minds such as yours truly don’t dabble in such metaphysical denomination. As such, if you want to “start early,” you need to start now.

I guess it might be easier to explain why you don’t want to start “on time” or “late.”

A rough part of senior year is that it isn’t really built to handle college applications. Sure, teachers might be a little nicer, but mostly they don’t give a shit. That’s because high school is not actively designed as a platform to get you into college. Instead, it is itself an institution that fulfills the requirements to apply to college. Kinda like Pre-Med!!!

In theory, your senior year should be the most challenging year of school. It’s the last one! That’s how video games work! It doesn’t quite feel like that, but it will be pretty similar in difficulty to junior year.

There’s also the fact that a new school year generally means a bunch of other stuff starts back up. Any sports, or clubs, or students orgs you were in are back and expect you back. They, too, do not care about your work trying to get into Pepperdine.

So that’s why starting all this essay stuff “on time” sucks. The Earth does not modify in any notable way to acquiesce to your new part-time job. And that’s what college admissions is: a part-time job. You now work 6-12 hours a week at the essay factory. The pay is terrible, but the benefits are solid if you make it to the C-Suite.

Full disclosure: My entire history as a consultant is starting “on time” with students. That means we would get crackalacking in late August/early September and be on the clock day after day until New Years + doing something dumb like U Michigan on Jan 11 when I really didn’t want to be working anymore.

The good news is we always got it done. All of it. And it was good. But that was going to be true no matter when we started because I am a crazy person who has never missed a deadline in his life and doesn’t know what will happen if he does.

But those deadlines were always right in front of us and permanently closing in. For reference, what the college season asks of you is something like:

Oct 15: A couple of schools operated by sociopaths have their EA deadline

Nov 1: Most schools you’d want to EA/ED/REA have their deadline

Nov 15: Some random state schools want stuff. It seems to vary. I think last year a bunch of Georgia Techs were due?

Dec 1: USC merit deadline because screw you that’s why

Early Jan: EVERYTHING ELSE

This site has a full list. It might be outdated, but it should give you an idea of what we’re working with:

The worst hurdle is actually the Nov 1 EA/ED/REA because you need to have your entire application done by then. That’s the personal statement, EC list, school supplement that should theoretically be the best one you send, and a bunch of other bureaucratic garbage. If you start on time, you have eight (8) weeks to do all of this. You don’t want that smoke starting September 1st.

College admissions is not a marathon. Nor is it is a sprint. It is a series of sprints that encapsulate the length of a marathon. It’s a brutal process that will be brutal no matter how you tackle it, but there is one factor that starting early can theoretically help you with.

I have already blocked whoever is posting this year’s “Day 23/154! You can do it!” post. Because last year those posts made me nearly put a brick through my monitor. There is something about active, unmovable, upcoming due dates for everything you are working on that will seep into your veins and convert your blood into atomic sludge with lots of cortisol in it. This is also why I don’t buy into college admissions as a “chance to find yourself.” Fuck that. Therapy doesn’t involve a stopwatch for a reason.

College admissions is a creative writing exercise. And creative writing on a timer is not good for you. It’s certainly not good for me. It’s why there are so few creative writers in this industry. Mostly it’s lawyer, business, or librarian types—great at deadlines and crisis-management, but not so much the making words sound pretty. I really am a free-spirited thespian thoroughbred, and I know by now what this process does to my soul. It’s how I justify charging so Goddamn much.

Starting early will not, inherently, make this process less stressful. I’m learning that the hard way, as I started early this year and am currently kind of a mess. You can tell when I’m cracking a bit because my pieces on Pre-Med divert into bizarre rants on Washington Post articles I’m haunted by and rants over why the hell no other consultants will advertise here so students will stop trying to pay me outrageous sums amounts of money to do my dream job when I’m already full.

But what it will let you do is chill. Take a week off. Go sleep. See your friends. Move to a new apartment that doesn’t have a dust mite infestation. Get that history paper done. Spend a week housesitting your mom’s cat while your dad is in recovery at a Seattle hospital. Eat a bagel. Put college admissions in a jar and leave it there until you feel a bit better.

It’s also why I sent you this piece: if you’re my student. I’m not actually sick. I’m just really really stressed and am human and need a few days or a week off. I feel terrible missing time because I know how important this all is to you, and I want to give you my everything, but the best way I can do that is to give myself some time to rest and decompress when I’m at my breaking point. And in return, I offer you the same exoneration whenever you need. It will all get done, I promise. Because we started early.

When you start on time, you do not get those weeks off. Because shit is due, and you have charted every week out ahead of time, and anything you don’t do now you’ll still need to do + whatever you already needed to do. Deadline Don’t Care.

And late? Well it’s a lot of what I just wrote, but also, I think you’re a dope. It’s pretty hard to rustle my jimmies, but they go haywire every December 21 or whatever whenever I read a “Lol just did six schools in one night. Nine more to go!”

…Do…do you want my support? Should I give you some hot tips on how to write possibly the most important 4,000 words of your life in a week? Is that before or after I provide some advice to the post right below yours, to the girl who started on time? The one whose hair is falling out and doesn’t remember how to sleep? No. I get super mad and don’t post anything and think you’re a dope. Because you’re a dope. You dope.

If anything, I get jealous of such posts. Maybe that is the answer? Maybe the 4,000IQ play is to fall into the nihilistic hole that is calling this process a lottery, crank out everything over winter break, and let the chips fall where they may?

I don’t care for stuff like free-writing or idea worksheets or any of that. I don’t recommend it for the same reason I don’t recommend hyping yourself up by watching five hours of “Motivation 2 Study” videos on Youtube. There is a very real type of fake-working that provides all the dopamine benefits of real work but without the finished product.

I wrote this piece last year. It covers a lot of the meta-system that I recommend you to go with. It’s also not very good, so do with it what you will.

But the core advice is sound. The best way to begin “brainstorming” on what to write about is to get to writing real, polished essays…but for schools you kind of don’t care about as much. Only once you have those essays in front of you can you get a better understanding of what’s working and what isn’t.

This is also why every student in America should be applying to The UCs.

Eight prompts. All nice and simple. Purposely asking for lack of college essay polish. Instead, the UCs specifically want you to answer each question like you’re answering a job interview question.

I’ve even had students use a speech to writing app to do these. It’s a cleaner, simpler form of writing that is much easier to start with. You just answer the question. Also, all four UCs should be about completely separate topics with no overlap whatsoever. So it’s a great way to build a bunch of narrative threads and see where they do.

(…Ok so there’s also something I call “EC profiling.” I don’t trust them to read your EC list. So if there’s stuff you’ve done that you super want them to know, you must get it in an essay. Have a nice paragraph where you basically repeat your EC list info. Then dive into the essay.)

(…Make sure to do #6 as it will become your “intellectual vitality essay that is the cornerstone of elite admissions. Really hit that one hard)

(If you’re URM do #7 and talk about your background. Just do it.)

Get those four essays done and polished, and then use them as a foundation as you move onwards into other essays.

Ok, peep this shit. u/scholargrade I need your takes. u/McNeilAdmissions I got you, fam. u/admissionsmom you gonna love it, too

BOOM. Greatest site ever. I think they have some spider crawler that auto-updates with new essays as soon as they go up. I have no idea if The International College Counselors are any good at their jobs, but their essay prompt page is SUCH HOT UNBELIEVABLE FIRE BOOKMARK IT AND LOVE IT AND REMEMBER COLLEGE WITH MATTIE SENT YA!

So ya, go do Yale. Sometimes the varying essay lengths can help a lot. Get content going ASAP, and only after you’ve writtenwrittenwritten, take a step back and see what you have. My guess is it will make things a lot simpler.